Have any Questions? +01 123 444 555
info@company.com
Login
New construction of the Pf dchensgraben motorway bridge

With a length of 531 metres, the construction of the new Pfädchensgraben bridge is a challenge in itself. In addition, it describes an S-curve in its course, which changes the cross slope of the new bridge superstructure from minus six to plus six percent. To master the demanding construction task, the executing company Heitkamp Ingenieur- und Kraftwerksbau, Essen, (since January 2021 Heitkamp Industrial Solution GmbH) relied on shoring and advancing scaffolds as well as the technical know-how of thyssenkrupp Infrastructure. The solution lay in the combination of a hydraulic system for height adjustment of the formwork girders and height-adjustable support carriages in the area of the pier scaffolding.

At a height of 48 metres, the Pfädchensgraben bridge spans the German federal motorway A61. Since 2017, this section between the Rheinböllen junction and the Hunsrück service station has been expanded to six lanes on behalf of the Rhineland-Palatinate State Mobility Authority. The two bridges Tiefenbach and Pfädchensgraben, which are around 50 years old, need to be completely renewed, as their structural condition means they can no longer cope with today's traffic volumes. In order to maintain traffic during the construction of the new Pfädchensgraben bridge, the first section of the new bridge was built next to the old bridge. After completion, traffic will flow over this new partial structure and the old bridge will be demolished, followed by the construction of the second partial structure.

30 percent load-bearing capacity saved
The Pfädchensgraben bridge is being constructed as a prestressed concrete bridge with a box girder profile and is being built with the help of a launching tower. In addition to the two abutments and ten piers, a total of eleven bridge spans are to be erected. The single span is 40.5 metres for the first and last span, and 50 metres for the remaining nine spans. The main components of the advancing scaffolding below are the pier scaffolding, the main girders, the formwork cross girders and the coupling joint support. The pier scaffolding lies on two three-legged push-through girders and was assembled from modular RöRo cross girders with a width of 25 metres and a height of 2.50 metres. On these girders, in turn, are the support carriages that carry the main girders, including forerunners and followers. These four-metre-high main girders each consist of two inner main girder discs (supporting discs) and an outer companion girder disc (companion disc) made of RöRo U 3500 system girders, which are connected via bracing to form a space frame. They carry the formwork cross girders, on which in turn the formwork frame and the formwork for constructing the superstructure are mounted. "In order to create a uniform bending line for the bridge structure, a cantilever arm with a fifth of the length of the bridge span is always concreted beyond each bridge pier," Matthias Lang, Head of Feed Technology at thyssenkrupp Infrastructure, explains the procedure for constructing the bridge. The launching tower for the next construction section is then attached to this cantilever via the coupling joint suspension. This can be moved longitudinally on the superstructure via a wheel chassis and regulates the suspension load of the feed scaffold via hydraulic cylinders. This creates a smooth finish at the underside of the concreting section joints. Lang: "Another static advantage of the cantilever arm is that it reduces the bay support width and thus saves about 30 per cent load-bearing capacity on the main girders. Or to put it another way: If the bay were always concreted from pier to pier, the main girder would have to be 30 per cent more load-bearing than it is now."

In the tightest of spaces
In Germany, motorway bridges usually consist of two individual structures, over each of which one direction of traffic is usually carried in several lanes. The cross-sections of the individual structures are usually wide enough to accommodate both directions of traffic if necessary. Thus, in the event of a renewal, this can take place under traffic. The situation becomes difficult if the new bridge structure does not run parallel to the existing one and, for example, describes an S-curve. In this case, the distance between the new structure and the old bridge is sometimes very small and requires a well-thought-out technical solution for the launching tower configuration and the formwork construction. This was also the case with the Pfädchensgraben bridge, as Lang explains: "In order to be able to pass the piers when moving the launching scaffold, both the formwork cross girders were shifted outwards by 1.5 metres each, as well as the main girders and three metres each on the support slides. Therefore, we used our modular RöRo cross girders with a length of 25 metres and a height of 2.5 metres for the pier scaffolding. There were situations within the S-curve where there was really very little space available, and we could just barely pass the pier with the shoring without touching the superstructure of the old bridge."

Resourceful technical solution
A complicating factor in the implementation of the S-curve was that the pivot point around which the cross slope varies from -6% to +6% in the course of the curve is located in the bridge axis of both bridge superstructures. Thus, the height of the opposite edge varies by about 1.60 metres. Lang: "Therefore, the shoring structure had to be designed to be height-adjustable." The technicians at thyssenkrupp Infrastructure came up with a clever technical solution: They combined height-adjustable support slides in the area of the pier scaffolding with a hydraulic system with which the formwork cross girders could be aligned accordingly. "The adjustable support carriages can thus be adjusted in height by about 58 cm. Since the support carriages are in the immediate vicinity of the piers, this alone raises the outer edge of the formwork by a good one meter. The remaining 60 centimetres were taken over by the hydraulic system under the formwork crossbeams," Lang explains the interaction.

"In order to successfully implement a bridge construction project of this dimension with all the challenges posed by the routing and the simultaneous requirement to carry out all the work while maintaining traffic, the individual trades have to mesh like cogs. For this, good communication between the individual parties involved and detailed implementation planning are the be-all and end-all. This was achieved with the first part of the Pfädchensgraben bridge, also due to the perfect cooperation with our customer Heitkamp Industrial Solution GmbH, Essen. Therefore, I am looking forward to the construction of the second partial structure," Lang concludes. 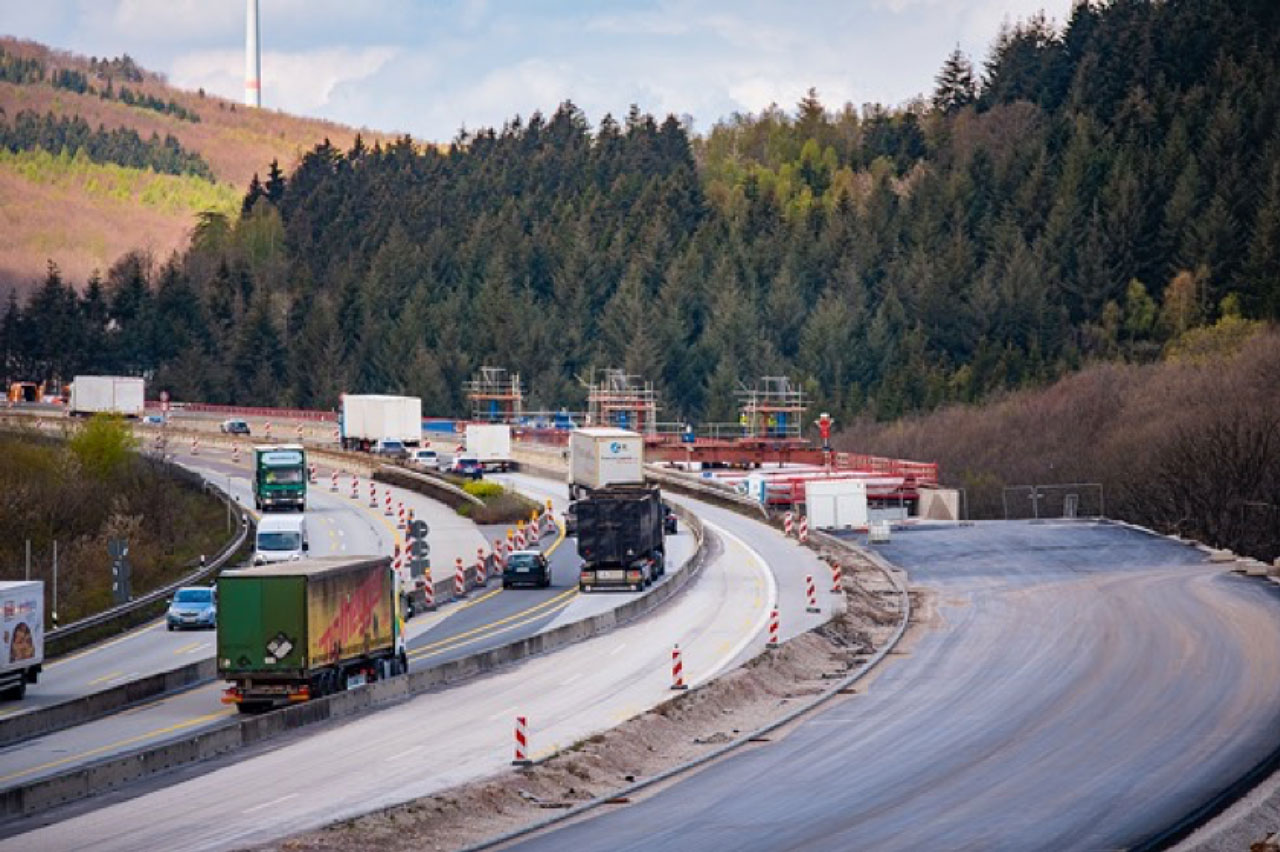 Construction under traffic: While the first part of the structure is being erected, traffic in both directions will be routed over the old bridge.
Foto: thyssenkrupp Infrastructure 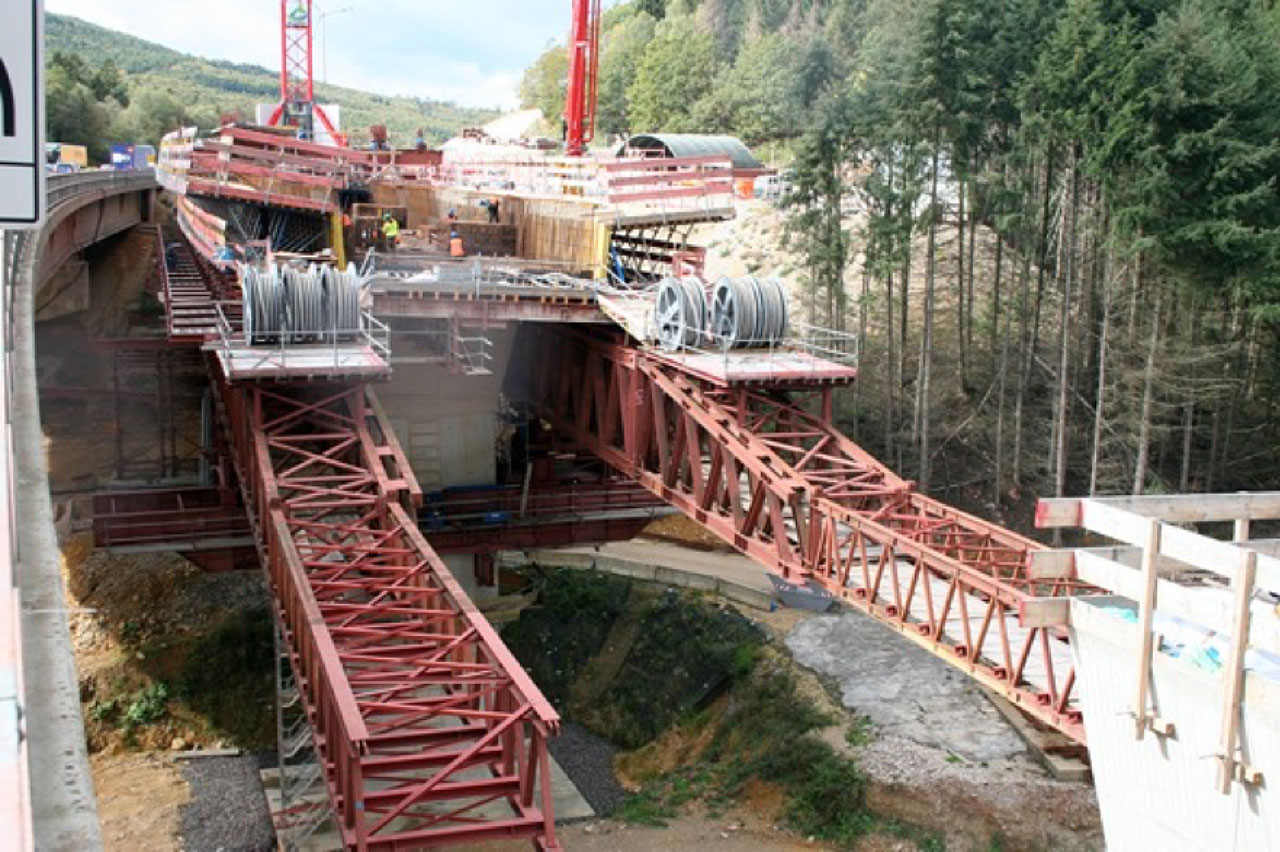 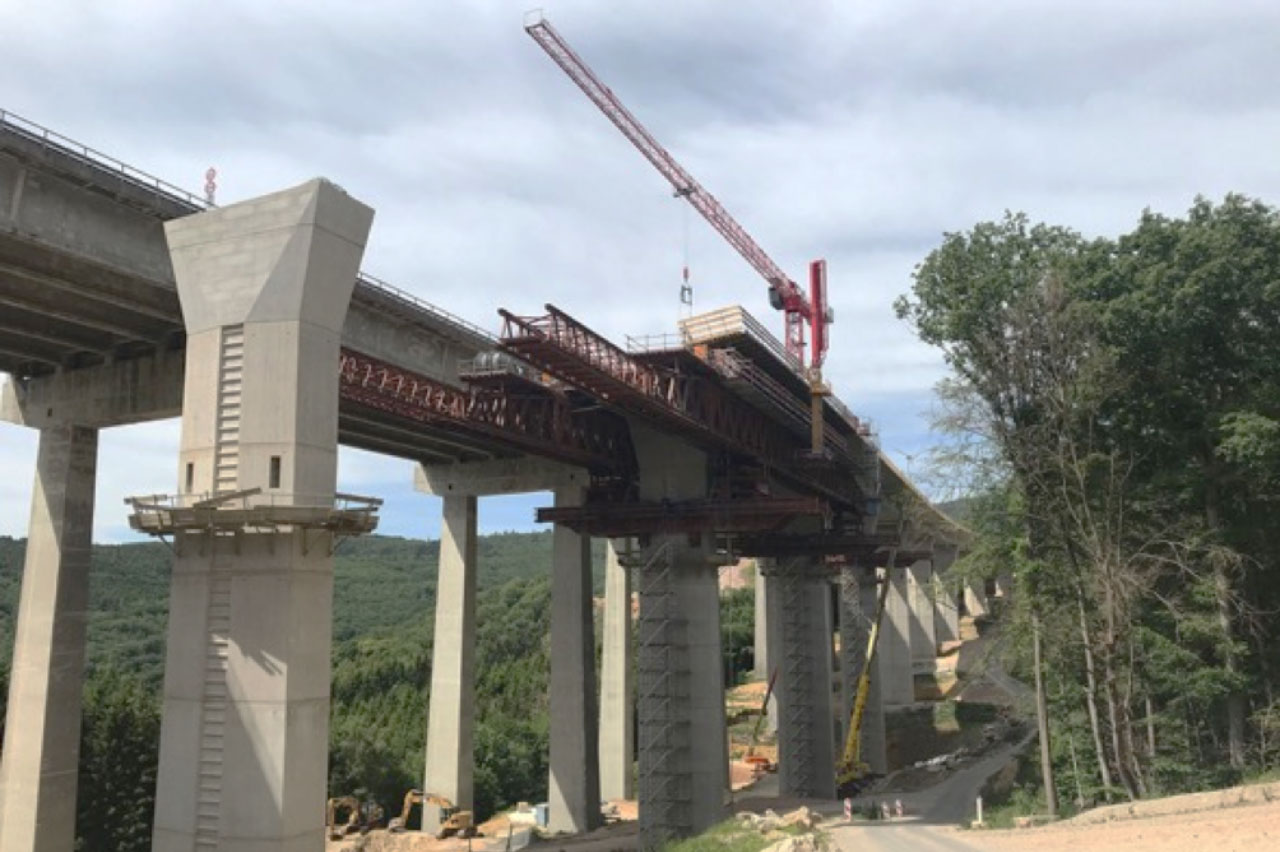 At a height of a good 48 meters, the telescopic arm moves forward field by field. The two main girders rest on the pier scaffolding.
Foto: thyssenkrupp Infrastructure 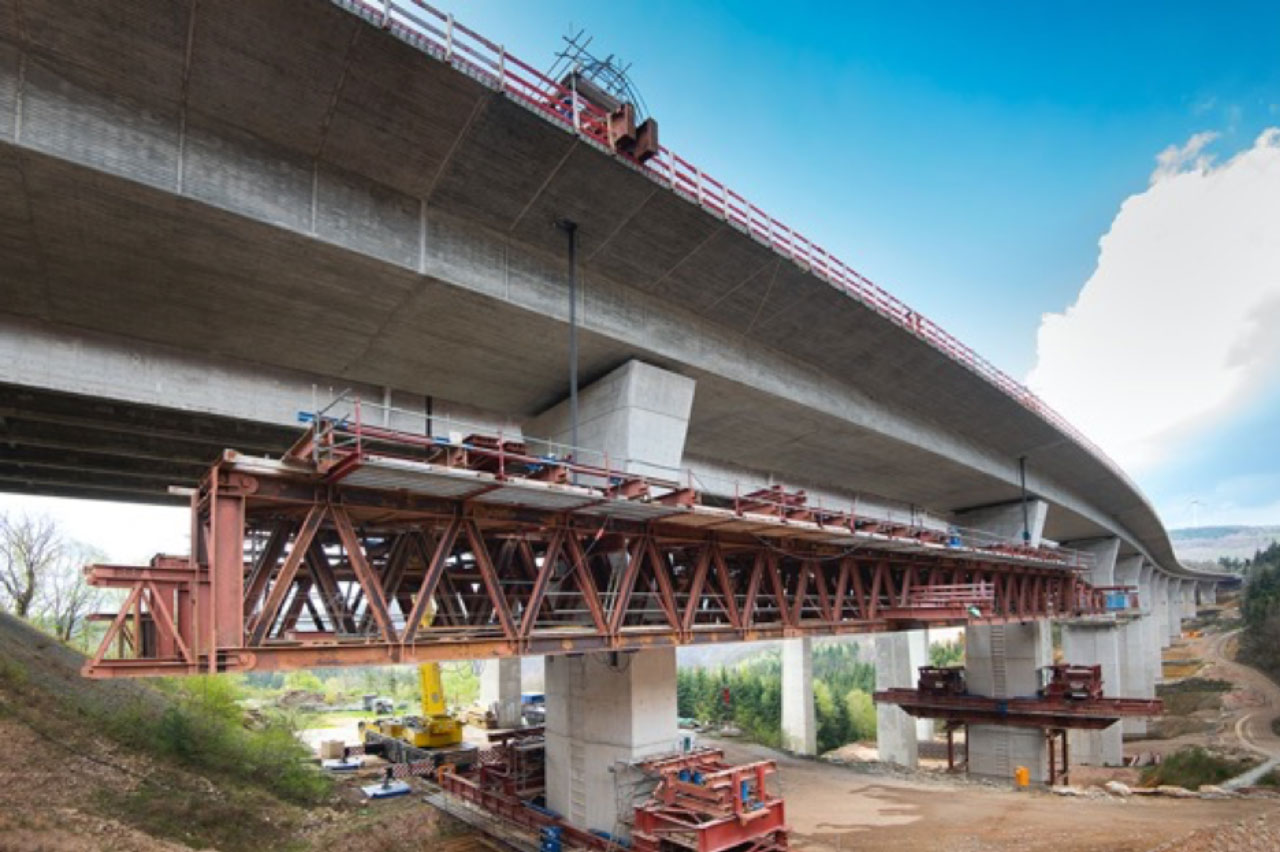 After completion of the last field, the shortened feed frame is moved into the previous field and lowered piece by piece with the help of strand jacks.
Foto: thyssenkrupp Infrastructure 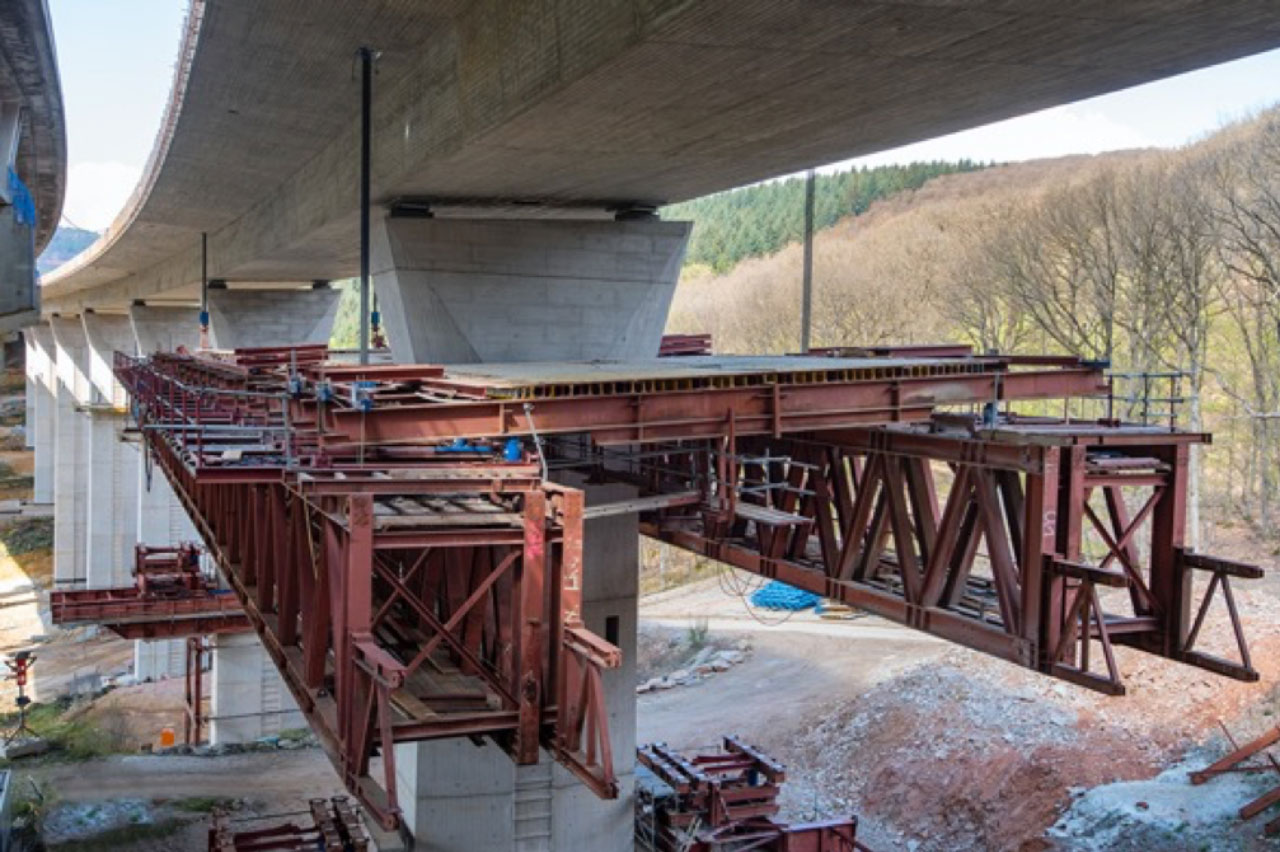 The pillar scaffolding has been dismantled and the telescopic tower hangs in four places on several strands.
Foto: thyssenkrupp Infrastructure 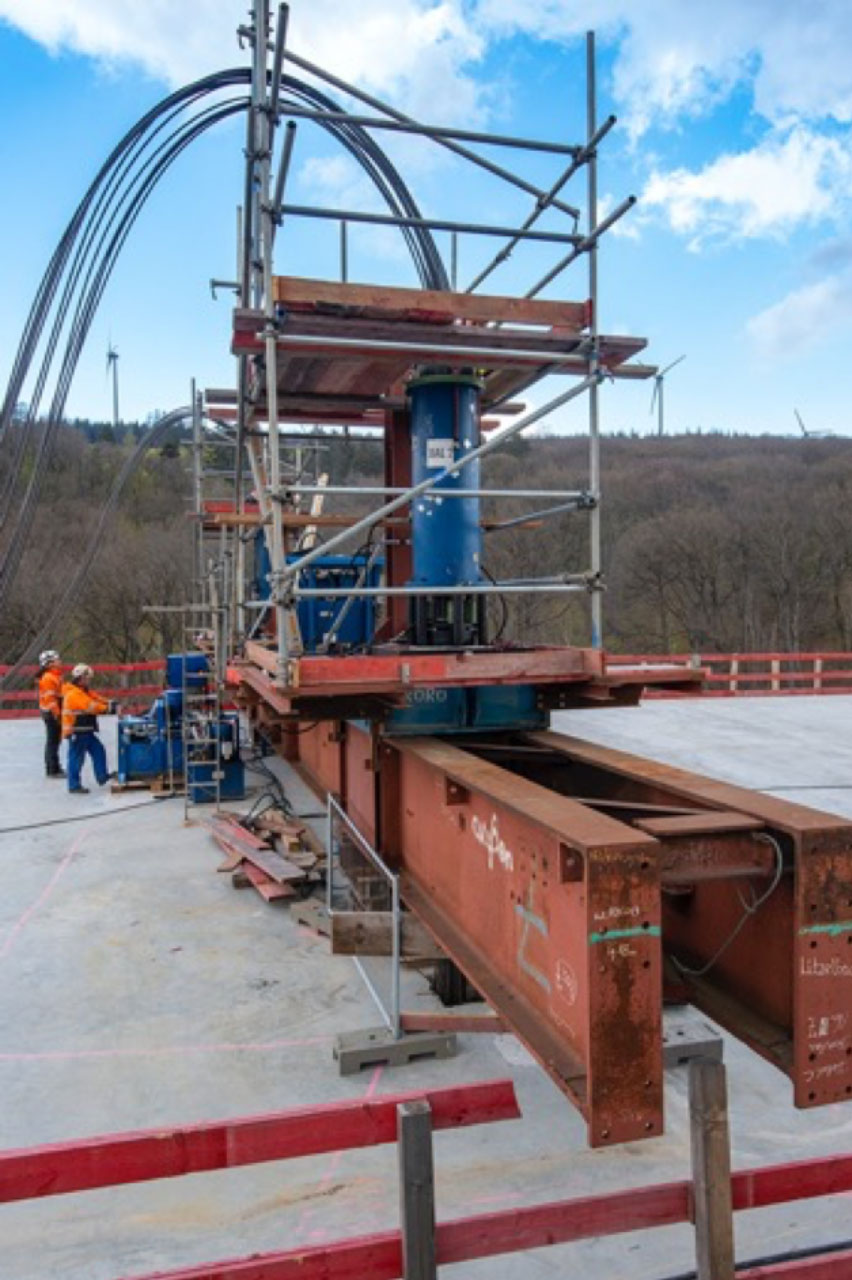 The hydraulic strand jacks are mounted on the bridge superstructure, with the help of which the feed frame is lowered piece by piece.
Foto: thyssenkrupp Infrastructure

LoginContact
You are using an outdated browser. The website may not be displayed correctly. Close